Saddened by the loss of our dear friend, John Gloor. 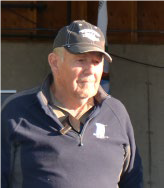 With deep sorrow, we announce the passing of John Gloor, a long-time AORS member.  Following his retirement, John spent many years as the unofficial “AORS Roadeo Master”, overseeing local competitions around the province, and the annual championship.

Having been raised in a foster home in Logan Township, Perth County, John Gloor received the best education you will find anywhere. He was a strong Lutheran but because of distance he attended the neighborhood Catholic School. When he completed grade eight, his foster father told him that he could not continue in school because he was needed on the farm, thus eliminating any possibility of attending high school. He remained at home until he was 19 but during that time he learned a great deal about repairing anything in sight. Eventually John got married and moved into Bornholm and lived there for 60 years. During that time he returned the favor and provided a home for numerous foster children. He and his wife, Jean, also raised six children of their own. In his spare time he liked to attend auction sales, taking their children to sports etc. and looking after the grandchildren.

John began his career with Perth County in 1984 as the Mechanic/Shop Foreman at the Mitchell Public Works Yard. Over his time he recalled working with some great equipment operators and the pride that the operators had towards maintaining and operating their equipment.  John was a very dedicated employee, often taking paperwork home after hours and arguing for things he believed in.

John was instrumental in the formation of the annual AORS Provincial Safety Truck Roadeo. Throughout his 18 years with the Roadeo” John saw it all, travelling to various venues across the Province attending local competitions and Provincial Championships. He provided a great contribution by assisting with the organization of the annual event and supported many Local Associations and County Roadeo’s each year in preparation for the Provincial event. John was a driving force behind the event, raising awareness, sponsorships, equipment modifications and perhaps most importantly providing encouragement to many Municipal staff across the Province.  John suggested that all participants should “have fun, learn and try to get better each year”.

John’s many contributions to the public works field were also recognized when he was named Ambassador to the 2017 AORS Municipal Public Works Trade Show held in Perth County.

John passed away on Tuesday, November 28, 2017.  His obituary can be found at http://www.lockhartfuneralhome.com/book-of-memories/3354789/Gloor-John/obituary.php.