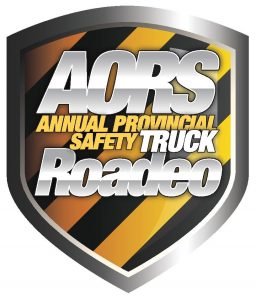 The purpose of the AORS Provincial Safety Truck Roadeo is to showcase the expertise of the best municipal equipment operators in Ontario.  The competitors are the winners of Roadeos in their Local Associations.  They have already been successful in elimination rounds, and are among the best equipment operators across the province.  The Roadeo promotes safety, courtesy and professional public works driving skills in a challenging competition.  The organization of the Roadeo is the responsibility of the AORS Education Committee, in cooperation with a hosting Local Association.

The AORS Provincial Safety Truck Roadeo started in 1994.  Each year the top three drivers are awarded trophies, plaques and cash prizes at an awards ceremony, and the winner is presented the Roadeo trophy at the AORS AGM the following spring.

Each year one of the AORS Local Associations hosts the Roadeo.  Their responsibility is to set up a committee of municipal and private sector volunteers to ensure the success of the event.  One of the side benefits to the organizing committee is the opportunity to work as a team and to get to know your peers within your own local association, and showcase a local community.

The 27th AORS Provincial Safety Truck Roadeo was held on Wednesday, September 28, 2022, hosted by the District 8 Road Supervisors Association, at the Strathcona Paper Centre in Napanee.  The District 8 Road Supervisors Association held its local Roadeo at the same location on Tuesday, September 27, 2022.  Thank you to the Suppliers who participated as sponsors and exhibitors in the 2-day trade show.

Congratulations to all Participants, Judges, Volunteers & Organizers for a job well done. A good day was had by all.

The Huron County Road Supervisors Association will be the hosts for the 28th AORS Provincial Safety Truck Roadeo scheduled for Wednesday September 27, 2023.  Check back for more information on location, venue, and sponsorship opportunities.

In 2011, the rules, circuit and scoring were modified to include the use of both wing and plow on vehicles to better simulate the actual environment in which this type of equipment is operated.

In 2014, the rules for the Provincial Safety Truck Roadeo were changed to allow two entrants from each Local Association that participated in a local Roadeo.  In addition, the winner of previous year’s Provincial Roadeo will be invited back to defend their title.

A variety of courses are offered throughout the year read more

Seminars and events hosted by other organizations that may be of interest to AORS members. read more