At its 2017 AGM, the Association of Ontario Road Supervisors (AORS) recognized a number of members who had achieved significant accomplishments or made noteworthy contributions to AORS in 2016.  Included among the recipients were 5 members who had helped organize major training events for their municipalities or Local Associations; 23 individuals who had completed the Public Works Leadership Development Program (PWLDP); and two members who shared the 2016 Marvin D. Halladay Memorial Education Award.  See the complete list of award recipients here. 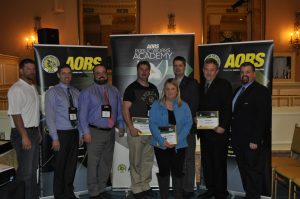