AORS Announces 2018 Driver of the Year

AORS is pleased to announce the winner of the 2018 Provincial Safety Truck Roadeo – John Gleeson, from the Municipality of Mississippi Mills, representing the Lanark County Road Supervisors Association.  John beat out 42 other competitors, and took the championship with a remarkable score of 367 out of a possible 370 points.  This is the second time John has earned Driver of the Year, having also won in 2011.

This was the 25th annual AORS Provincial Safety Truck Roadeo.  It was held in Owen Sound on September 12, hosted by the Grey County Public Works Association. It was also the first time the Driver of the Year trophy was presented as the John Gloor Memorial Trophy, in honour of the late John Gloor, a founding father of the AORS Roadeo and long-time Roadeo Master.

First runner up was Richard Elliott from the Township of Adelaide-Metcalfe, representing the Middlesex County Public Works Association.  Second runner up was Steve Kidd from the Township of Selwyn, representing the County of Peterborough & City of Kawartha Lakes Public Works Association.  Steve is also a two-time past champion, having won in 2015 and 2016. 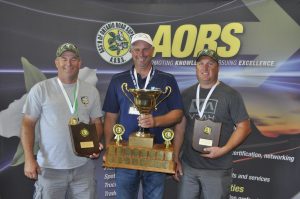